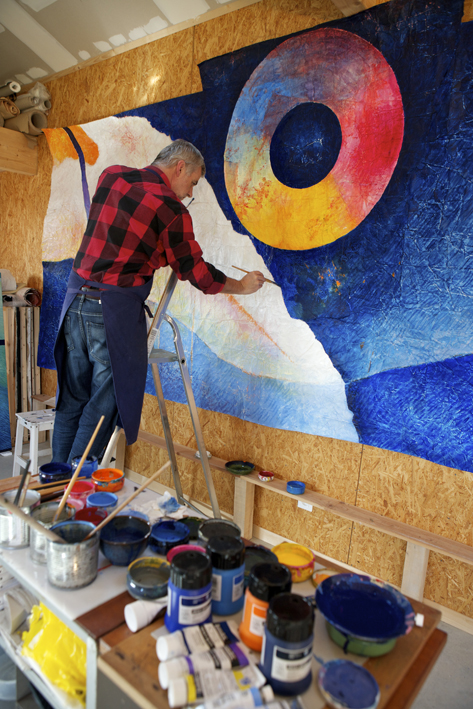 Passing the light on

Making our way into a palette of various shades whose light is the glorious shining of the soul.

The stroller who embarks into the path mapped out step after step by the work of the painter is first and foremost caught by the aesthetic quality of the line drawn where the substance moves forward being blunt,stark naked, dense and shifting, clear, dark. If the stroller walks on, he will have to give rhythm to his step within the tempo of his work, being quiet and determined. He will have to agree to leave on the edge of his path the emergencies of the present which keep him in his own forgetfulness.

He will have to take his time and be watchful.

As a new world is now presented to him.

The Ereignis of a pictorial matrix where – through the intervening mediation of an originally wroughtsubstance – the mirror and the reflections of a new vision of the world are now created. Solid, crystalline, dark, fluid, translucent, diaphanous, transparent, this substance nowcomes in a variety of compactor fragmented masses, in a rain of thin and flowing lines, in strait or curved strokes appearing similar to numerous kaleidoscopic places which become necessary to the miraculous happening of the light.

It is here indeed, in such a capacity for sudden appearance, that the work of the painter suddenly takes all its meaning and summons our dasein in the heart of the surprising flashes of the light. This is why,in the end, beingthus far caught in the excess of his own share of darkness, the solitary stroller may, in the path of these dazzling sights, look for the stump of his own blindnessand he finds, in the far reaches of his safe and long walk, the tranquil space of a quiet social life.

Thus, in this way of thinking about the observation of the world which Jean Paul Ingrand ‘s own work offers to our own vision, being thenrid of a materialistic conception of nature, a multiplicity ofwaysare promised to the human being in search of wisdom. The first one among them couldundoubtedly be the one which consists in accepting the vision of the work upon itself as asparkling light where one can draw the potentialities of its budding humanity.

In this way, the piece of work which is offered to us in this vast work is the one of an artistwhose labor feeds on the potentialities left open thanks to the thoughts which came from the Enlightenment.

Jean-Paul Ingrand, a painter of the Enlightenment.